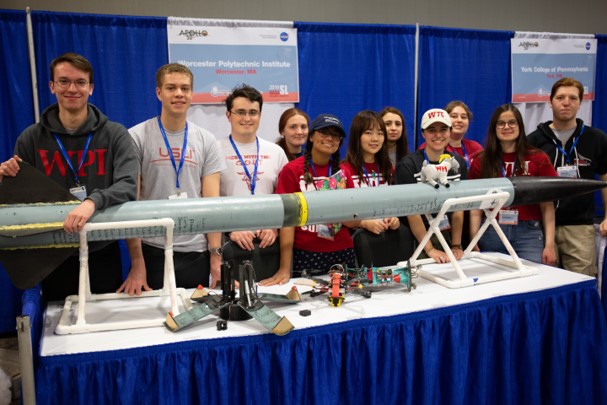 The team presenting their rocket and payload at the NASA SLI rocket fair.

While WPI had competed in rocketry competitions previously, namely Battle of the Rockets, HPRC as we know it today was first founded in 2018 as WPI University Student Launch Initiative (USLI). After pitching the project to the AIAA Officer Board, the team received its initial funding. The project name, G.O.A.T.S was selected in honor of WPI's mascot, Gompei the Goat. Having just started out, the members of the team lacked experience. The officers were mostly sophomores leading a large group of mostly freshmen. Despite this, the team spent the year learning and overcoming challenges at every step. They submitted their first design reviews, solved unexpected vehicle packing problems at their subscale launch, and even rebuilt the entire lower airframe in a week after its loss due to bulkhead failure on its first test flight.

While not every rookie team makes it to launch week, WPI got there, beating many tough challenges along the way. Ultimately, when the team's rocket took flight at the competition launch in Huntsville, it was destroyed at around 800 ft due to a defect in the motor the team purchased. While it may have been disappointing, the team still returned home excited. The members learned a lot from meeting with other teams and NASA engineers and were already brainstorming new ideas for next year before launch week was over. The first year was not perfect, but it cemented the team as WPI's premier rocketry team.

Our first launch vehicle, named Batman, was designed to reach an apogee of approximately 4094 ft and split into four independent sections over the course of its descent. The four sections of the rocket were the upper airframe, the lower airframe, the payload retention system, and the nose cone, which descended separately from the other three sections. The upper airframe housed the payload retention system for the duration of its flight and released it during descent so the payload mission could be performed. The vehicle had three parachutes, a nose cone parachute, drogue parachute and main parachute. The launch vehicle’s flight data was recorded using a Raven 3 Altimeter that was housed in the electronics bay.

Our payload, named Robin, was a quadrotor UAV housed within a cylindrical retention system composed of Blue Tube 2.0. The tube held the UAV as well as a 3D printed base to hold the UAV in place and was to be ejected from the rocket during descent. When activated, the system was designed to unfold, opening its four arms to right itself in the process to deploy the UAV. This unfolding design allowed for a very simple and reliable system, containing few moving parts to minimize points of failure while remaining spatially efficient.